What has changed in between two pivotal Neural magazine issues, dedicated to women artists in new media art and twelve years apart, (issue #24, “Geek Girls”, 2006, and issue #61, “Speculative Pink”, 2018)? These issues ‘archive’ two different historical moments, and it is equally important to accumulate further archival resources to understand this topic in contemporaneity. Which, incidentally, is partly what the Neural Archive project has been aimed for, since late 2000s till now. And more recently this is what the creation of Temporary Libraries of Media Art aspire to, including the recent Norwegian one. The combination of the publishing activity, and its wide impact and compellingly updated vision, with the archival qualities of an organised collection of printed material, is a strategical gesture to understand the role of women in new media art and possibly inspire new generations to be involved. 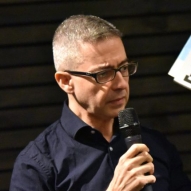 Alessandro Ludovico is a researcher, artist and chief editor of Neural magazine since 1993. He received his Ph.D. degree in English and Media from Anglia Ruskin University in Cambridge (UK). He is Associate Professor at the Winchester School of Art, University of Southampton. He has published and edited several books, and has lectured worldwide. He also served as an advisor for the Documenta 12’s Magazine Project. He is one of the authors of the award-winning Hacking Monopolism trilogy of artworks (Google Will Eat Itself, Amazon Noir, Face to Facebook).

FAEN Academy is a pilot project supporting the development of new artworks by young female artists working with experimental art in Norway.
FAEN Academy focuses on art productions from concept to exhibition-ready work in close collaboration with FAEN partners.
FAEN Academy offers young artists support and advice from established artists and experts in the field through workshops, meetings, and ongoing guidance throughout the production.
FAEN Academy is initiated and organized by Zane Cerpina / TEKS – Trondheim Electronic Arts Centre.